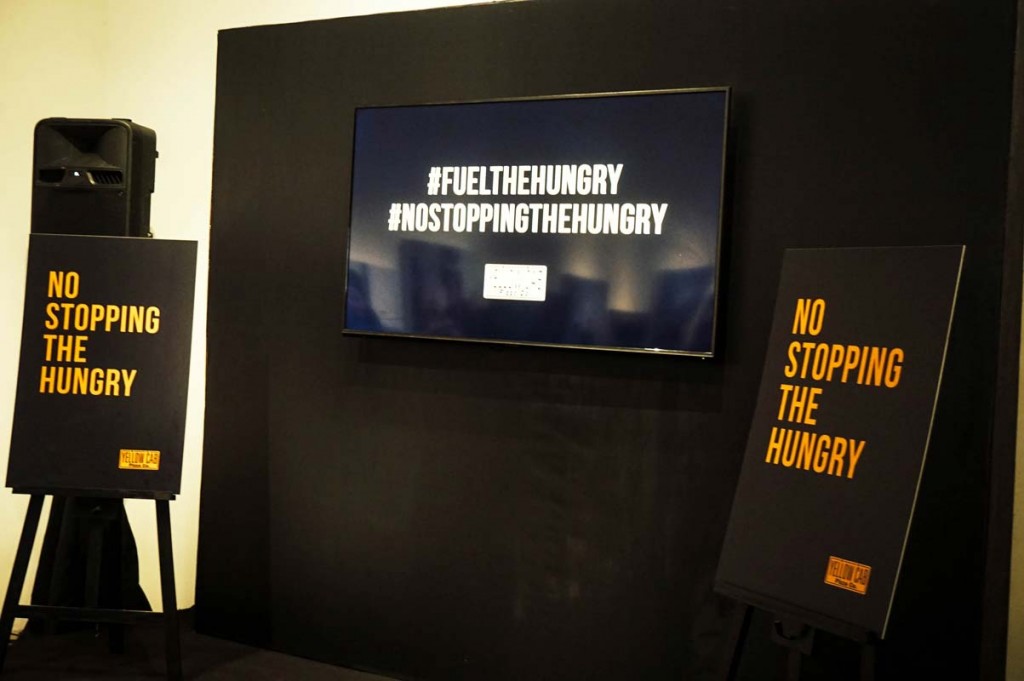 Meet 8 of the hungriest personalities in sports, music, fashion, film and art, and know what keeps them going and what drives their passion for greatness. 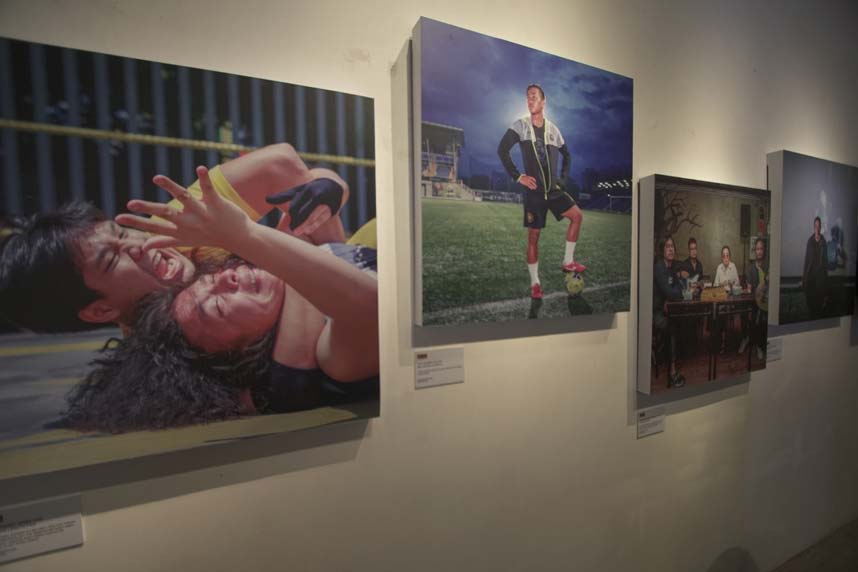 Hunger is what fuels people to change the world and it is what drives their pursuit for greatness. This month, Yellow Cab Pizza Company fuels the hunger of this generation’s great eight, proving that hungry people are unstoppable; they are invincible. These individuals best represent Yellow Cab’s big campaign: No Stopping The Hungry. 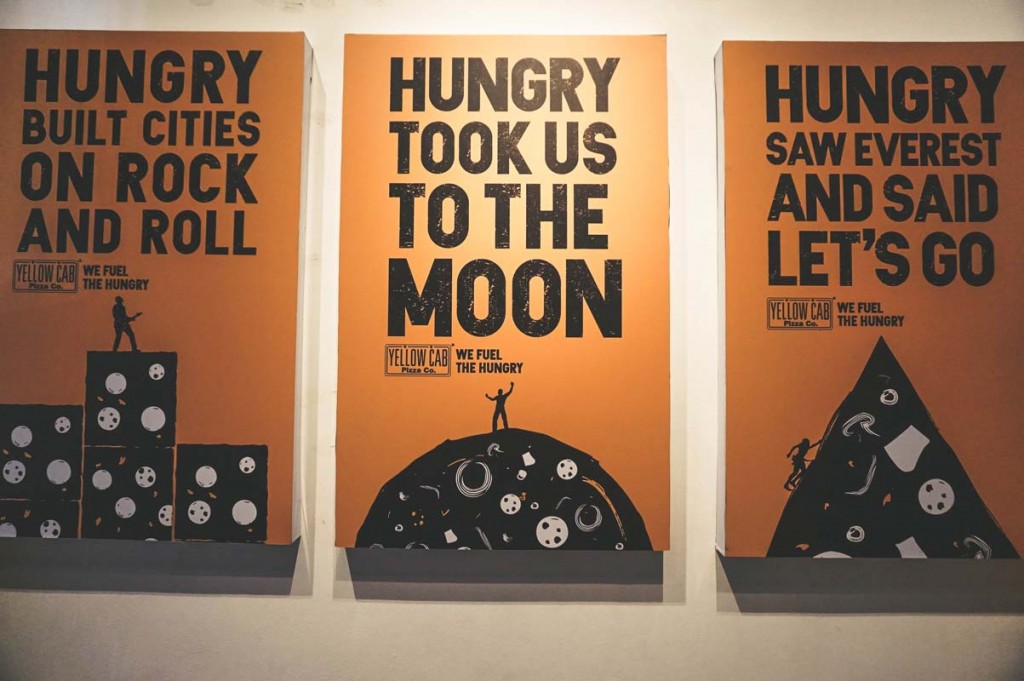 They call themselves “four introverts” who were so hungry with communicating their emotions through music that they decided to form a band. Up Dharma Down was going against the odds with their hunger to convey pent-up emotions at a time when this kind of music wasn’t so popular among Filipinos.

They shared, “We started out as opening acts for comedy bars and we were paid in peanuts, no joke. We took it all in because it was the first step for our music to be heard. We thought no one would listen but as the years went by, people started looking for our music.”

For years, Up Dharma Down went against all odds and paid their dues. Now, we know where their hunger took them – to the top.

At the young age of 21, Anygma founded and established the FlipTop Movement because he was hungry for the local scene to be appreciated. He wanted to correct the misconception that battle rap is just all about vulgarity and cursing. “My intention for building this industry is to show people that FlipTop is all about creativity. I started FlipTop by borrowing money from a friend and I didn’t realize that so many people would be on board for it,” Anygma shared.

With over 980 million views and more than 2 million subscribers on YouTube, it is the most viewed battle league in the world. FlipTop is a growing culture, and Anygma is here to make sure that it reaches greater heights in his lifetime. 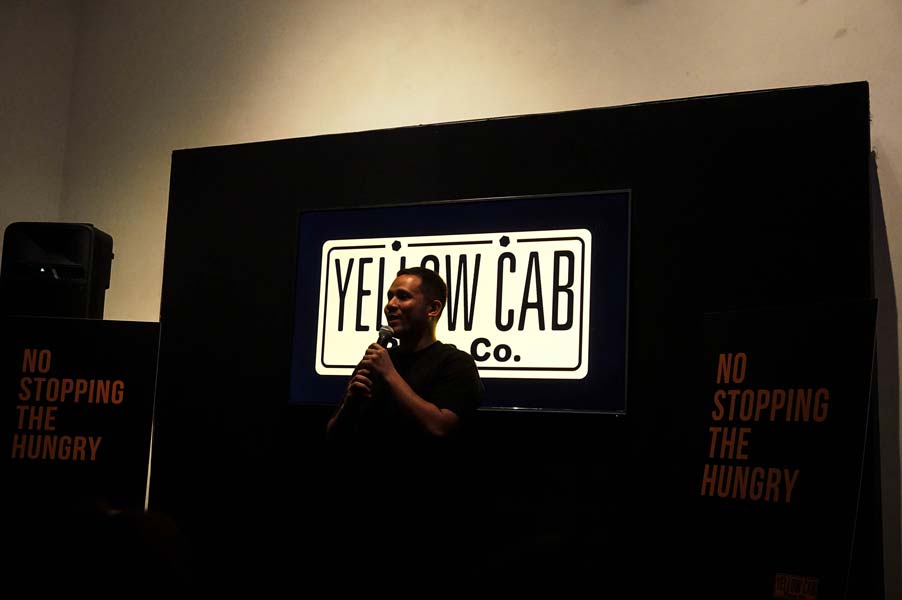 In college, Pepe had to make a thesis film but he pushed the boundary and went on to make his very first feature film, which became “Engkwentro.” He recalled, “I was hungry to tell the story of people being killed. This film was made 9 years ago and it is still very relevant up to this day.”

Non-conformist Pepe knows that his works challenge society even when the reality of it hurts. “Some people obviously don’t like it – I get raised eyebrows – and that’s okay. That’s what makes me hungrier to keep on making films that people will talk and debate about.” To this day, Pepe is an internationally-awarded filmmaker which makes him a well-respected young director in the industry.

Being the son of the late actor Ferdinand Poe, Jr. has its ups and downs and for tattoo artist and DJ, Ron Poe, it’s finding the balance between the two. Ron admits that he’s always being compared to his late father, so his hunger to make him proud and make a name for himself has led Ron to co-establish P&P Tattoo, which manifests his passion for body art.

“I want to challenge cultural norms, to break the cultural stigma of having tattoos. People think that we are criminals or addicts, and it’s just not right. I am aware that others will always compare me to my father and that’s okay. I just tell them that like my late father, I am an artist too who uses a different medium,” Ron Poe shared.

Now, P&P Tattoo is a thriving business and what was once Ron Poe’s passion has turned into a hunger that just can’t be satisfied.

Brothers Vince and Emil have always been fans of streetwear but found it very hard to find local brands that serve up this style. Fresh out of college and looking to dabble into business, they founded DBTK. Without any background or knowledge in the business of fashion, Vince and Emil took the plunge and banked on their passion for streetwear for DBTK to become a success.

“We came to this business with zero knowledge, with nothing, with only trust in each other that we will be able to pull through everything. We started creating our first t-shirts at home and we had no idea who would buy them,” the brothers said.

This year, DBTK has consigned with many streetwear stores in malls and more importantly, they are expanding internationally.

Davao-based electro-pop musician Skymarines was discovered by Up Dharma Down. Shy and withdrawn, Skymarines really never intended to make it “big.” She shared, “I used to do a lot of covers back then but I was already writing a lot of my original songs. I kept writing, I kept singing because I wanted to battle my low self-esteem issues. Let them say, ‘She’s fat’ or ‘she’s cheesy,’ my music is my own and I will live my life the way I see fit.”

Despite her day job and fulfilling her role as a mother, Skymarines continues to produce her own songs and record her own videos. Her hunger is constantly driving her to make her mark in the music scene.

PWR President Mark Javellena, a.k.a. Jake de Leon in the wrestling world, has always dreamt of becoming a professional wrestler. But because he was small and chunky, Jake thought he would never make it big in the ring.

“Nobody took wrestling seriously; it was a joke for most people I knew and it was disheartening at first. My hunger to change the notion that wrestling is useless drove me to find people who had the same love and passion for the sport,” Mark said.

His hunger for greatness and to make wrestling known as a respectable sport in the country has led him to find other wrestling enthusiasts in the country to formally establish PWR. Today, PWR has monthly shows which are attended to by massive crowds of Pinoy wrestling fans.

Growing up in an impoverished town in Compostela Valley, Eric Giganto was fueled by an irresistible hunger to succeed. He told himself that one day, he will be able to survive everything and so at age 12, he left for Manila on a Football scholarship.

“I was thankful for the many people who believed in me and my hunger for the sport. I knew how to play, but these people who supported me made me a better player,” he shared.

After finishing his schooling, Eric continued playing the sport and is now a key player for KAYA FC. Eric’s hunger drove him to succeed and he now inspires young athletes who dream of making it big in the sports arena. 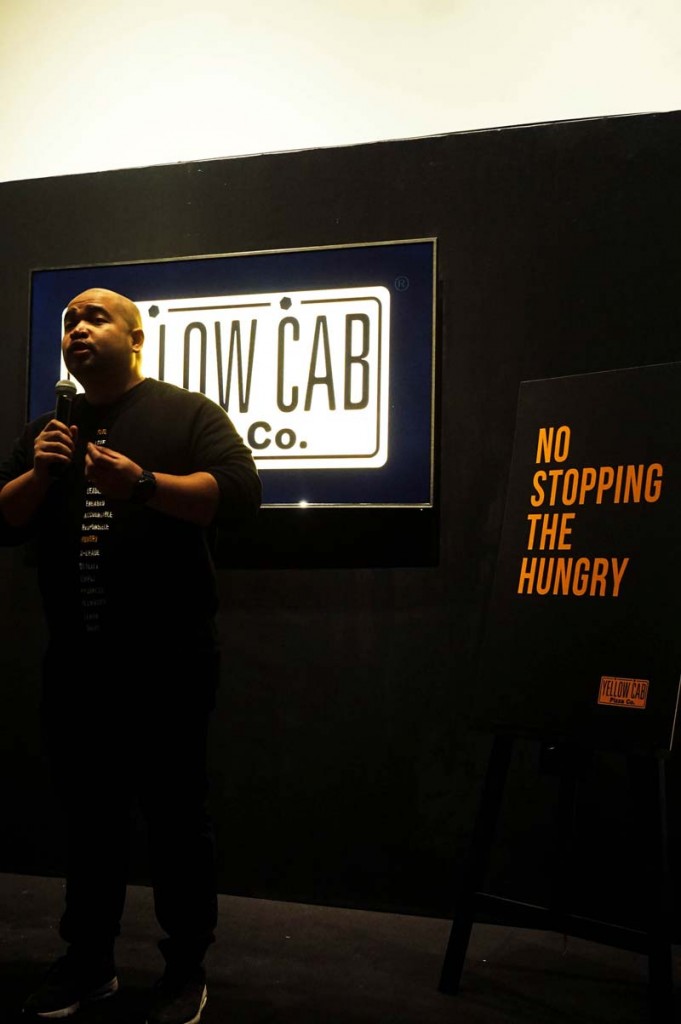 Each hunger is featured in a short clip that gives a glimpse into how Yellow Cab fuels the unstoppable pursuits and passions of hunger.

“We’ve always believed that real greatness starts with being hungry,” said Mark De Joya, Brand Development Director of Yellow Cab Pizza Co. “So through this campaign, we hope to ignite and fuel your personal hunger and find that something which drives you to be where or who you want to be.” 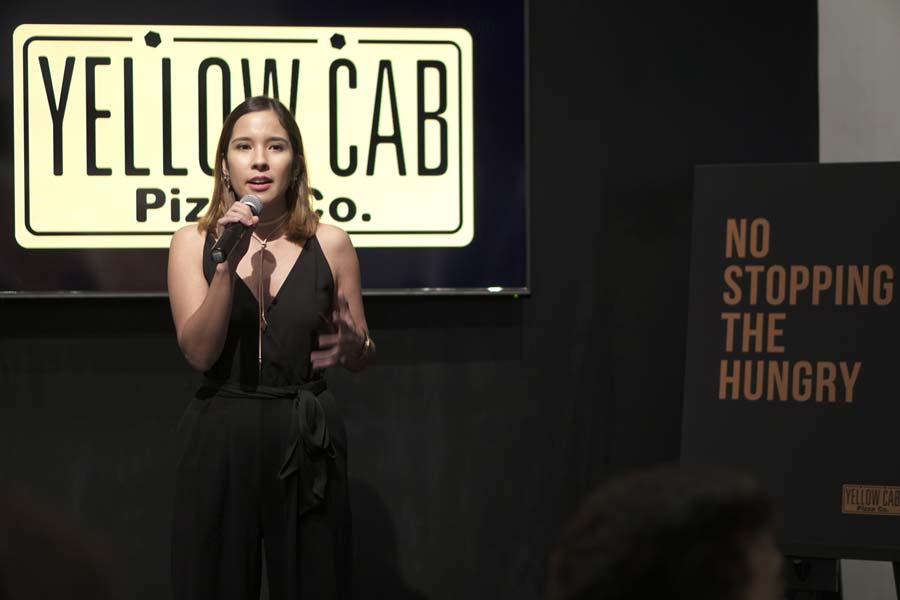 “We are also excited to announce that Yellow Cab wants to hear what you are hungry for and where this hunger will take you with a P20,000 hunger grant. Whether it’s finally recording your music, funding your start-up business, or finally pursuing a passion project, we at Yellow Cab want to literally fuel that hunger,” added Elise Veloso, Senior Marketing Manager of Yellow Cab Pizza Co. 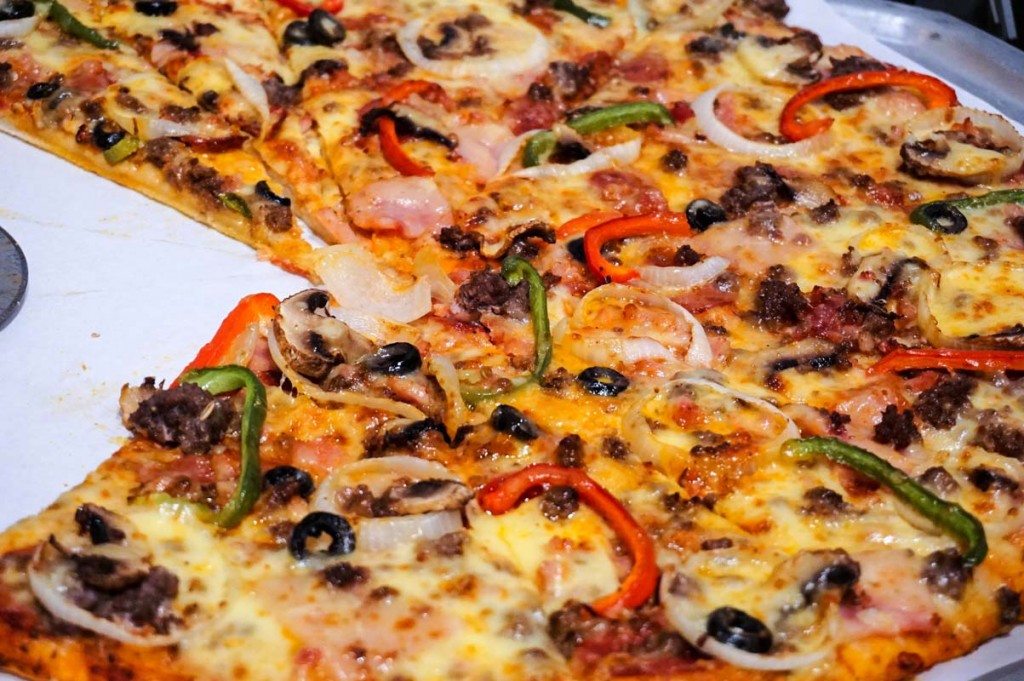 A grant is a non-repayable fund that will be given by Yellow Cab to deserving groups or individuals. The Pitch Your Hunger Contest is open to all Filipinos of legal age and will run from October 27 – November 9, 2017. Post your 30-second video clip pitch on Instagram by tagging @YellowCabPizza, with the hashtags #FuelTheHungry, #NoStoppingTheHungry and #HungerGrants. Be one of the lucky 20 winners who will each receive a P20,000 hunger grant.

Keep dreaming, stay hungry and find that something which fuels your personal hunger – which is definitely a big, generous slice of Yellow Cab pizza! 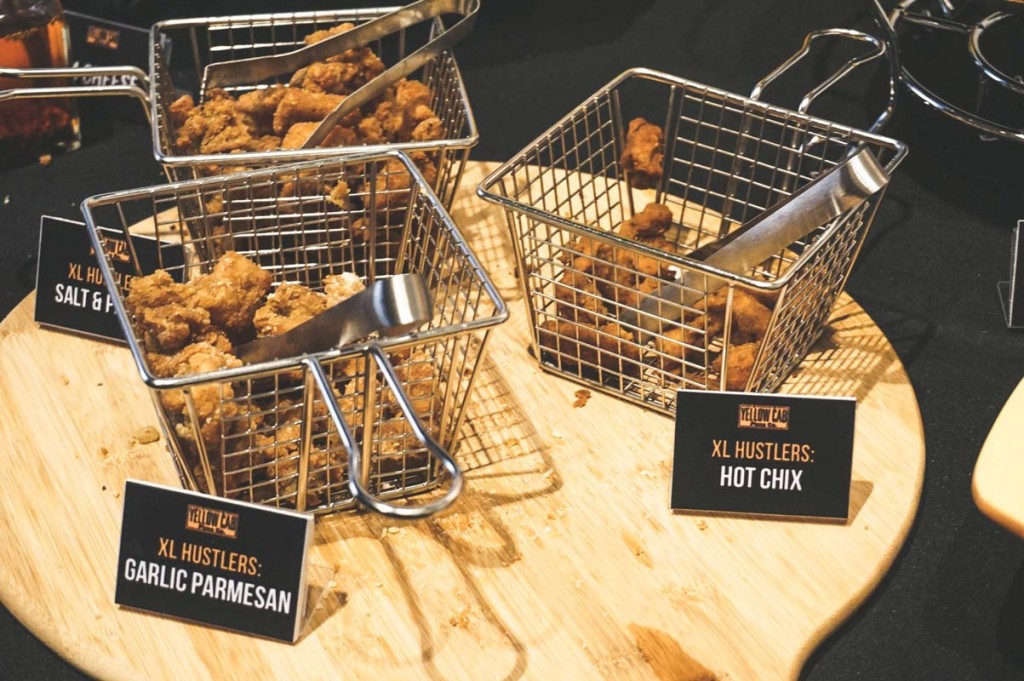 Share your hunger stories with us and how Yellow Cab fuels you every day. Use the #FuelTheHungry and #NoStoppingTheHungry and tag us on our social media accounts: 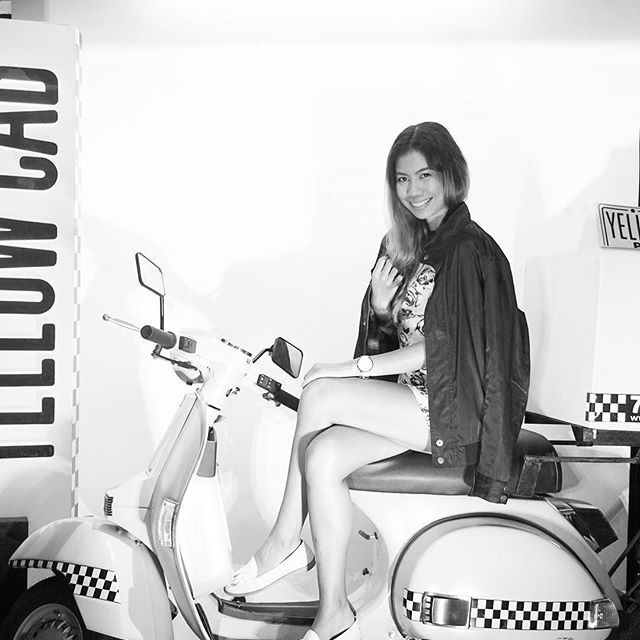